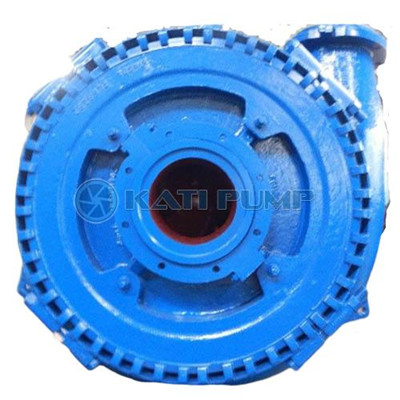 Single suction pump, also known as end-auction pump or single stage pump, working principle of which is: when the pump starts, the pump shaft drives the impeller for high speed rotary motion, forcing the pre-filling fluid between blades to rotate. With the effect of inertial centrifugal force, the fluid moves along radial direction from the impeller center to the peripheral region. When the fluid obtains the energy in the movement through the impeller, the static pressure is increased and the flow rate is increased as well. After the fluid leaves the impeller and flows into the pump shell, it is slow down in the expanding tube within the shell, causing part of the kinetic energy converted to static pressure, and finally it is discharged from the pipeline along the tangential direction. When fluid from the impeller is pushed towards to the peripheral direction at the same time, low pressure area is formed in the center of impeller. With the impact of total static pressure difference between fluid level of storage tank and the impeller center, the fluid is sucked into the impeller center. Relying on the continuous operation of the impeller, it is possible to make continuous fluid suction and discharge.

Double suction pump is an important type of centrifugal oil pump. This type of pump impeller actually consists of two back-to-back impellers, from which the water flow into a volute. One double suction pump works just like two same diameter end-suction pumps work at the same time, so its flow quantity can be doubled by using the same outer diameter impeller. The horizontal split structure of pump shell makes easy inspection and maintenance possible. Meanwhile, the entry end and exit end of double suction pump are in the same direction, being perpendicular to the pump shaft, which is helpful for the layout and installation of pumps and water pipes; double suction pump is characterized by symmetrical impeller structure and non axial force, so it can run more smoothly and can satisfy the operating requirement of mass flow and high lift. It is widely used for the fluid delivery in drainage and irrigation of farmland, waterworks, pump stations, power stations, chemical industry, mining, fire fighting and shipping, etc.

Double suction split case pump is a type of double suction pump. It is suitable for those ordinary and recycled water supply needed mass flow and high lift flow. Transmission medium is required to be clear water or other liquid with similar physical and chemical properties to clear water.

We are a single suction mud pump supplier. If you are interested in our products, please contact us now!